Jeffrey Sharp is hardly a newcomer to the film industry. As the co-founder of Hart Sharp Entertainment, Sharp’s producing credits include staples of American cinema from the late nineties and early aughts such as “Boys Don’t Cry” and “You Can Count On Me,” for which he won an Independent Spirit Award. Nevertheless, when the New Yorker was announced as the new Executive Director of the Independent Filmmaker Project, replacing new Toronto International Film Festival Co-Head Joana Vicente in March, many in the film community were surprised. Like Vicente, Sharp’s background as a producer is consistent with the non-profit’s mission of providing grants and other resources for filmmakers, but since Hart Sharp dissolved in 2007, he has been less visible on the scene.

That changed this past week, thanks to the 41st edition of IFP Week. With a record 4,699 meetings taking place at the annual New York gathering and a 45% increase in revenue from sales, the event kept Sharp busy, dashing around the Made in New York Media Center and overseeing a busy program of panel discussions, screenings, and forums for filmmakers to pitch new projects. Shortly before the event kicked off, he sat down with IndieWire to discuss his understanding of IFP’s needs and how they speak to broader challenges facing the future of the film industry.

How would you say that IFP’s mission has evolved over the years?

IFP stands for “Independent Filmmaker Project.” If you look at those words, “independent” has been co-opted. That word doesn’t really mean anything anymore. For many of our filmmakers, their first films are financed by a streaming platform or go on to commercial success. So “independent” really is somewhat nebulous of a term. “Filmmaker”: IFP really embraces television, podcasting, all sorts of AR, and VR with the Media Center. Filmmaking is very much at our core, but it’s about storytelling. You know, grab those multiple formats. And then “Project” implies something contemporary, and we’re 40 years old now.

What gives it relevance now?

There’s such an important role for us to play right now. In the industry right now, there’s this call for diversity and participation and new voices and new ideas. IFP is perfectly situated to deliver on that promise. I think with the filmmakers we deliver every year, just being on the inside having a front row seat for how the projects are selected is kind of amazing. Our programmers are so extraordinary, so talented. They’re able to pick from essentially some very raw early form stories and help them find that filmmaker, that voice that’s going to emerge and grow.

The institution may be supportive of diverse voices, but you’re a white guy. How do you approach the optics of that as the new face of IFP?

I think it’s a challenge for the film industry as a whole. I was at Art House Convergence last year, and I loved the spirit of collaboration, just the way people worked together to open up the film industry to the secrets worth sharing. But I was also reminded that it’s primarily a very, very white industry. It is — the film festivals, the programming, the executive directors. There are probably many reasons why that’s traditionally been the case. But there’s an enormous opportunity there for them to build out programming and leadership across the board. So diversity has to be reflected in the ranks of those festivals or organizations that are promoting, supporting, and discovering. There’s an urgency to that. We would like to be leaders in that and have a voice in terms of what we do.

As a producer, what sort of challenges have you seen in terms of getting diverse projects made?

It’s crazy. We were able to finance “Boys Don’t Cry” independently. I produced Kerry Washington’s movie first “Lift,” which was came out of the Sundance Lab and was directed by two African-American filmmakers from Boston. When we were financing that movie, we were told that no African-American-starring, -directing film could be made, not only for international but domestically in a theatrical release. We screened it up at the Magic Johnson Cinema in Harlem, and we were really looking for that validation from the African-American community as well as the mainstream independents. So yeah, I feel like we’ve always been out there really looking to tell those stories that maybe were slightly ahead of the curve. I do see some encouraging signs. You know, you have executives inside these companies — at Fox Searchlight, at Netflix — that are really looking to give new filmmakers the opportunity to make their second and third films. I see it happening. It’s pretty amazing. So I don’t think those resources were available back then.

How does your experience as a producer inform the opportunities you see for IFP now?

In all forms of commercial storytelling, there’s an incubation process you address as a producer. That’s the piece that I think we can really support in unique ways. Right now, there aren’t the resources for development right now. A few production companies here and there will option a book just on that level. You still have producers like Anne Carey and Anthony Bregman and Christine Vachon optioning books early in the process. But to find money to develop those into screenplays is really challenging. It’s not that much money, but it’s high-risk capital.

This fall, the streaming landscape will grow much more crowded — from Disney+ to HBO Max, it’s a whole new world. How do you see these newcomers impacting filmmakers?

I mean, the streamers expect a fully packaged project. So I think IFP has a role to go beyond just the curation and the initial processes of IFP Week, to find ways of supporting producers and directors in developing those projects. Our work with the Venice Biennale College is a great example of that. There’s our fiscal sponsorship program that we primarily use for docs. I’d like to be able to enable New York independent producers to actually be able to fully develop other projects and get them to a place where they don’t have to bring in money to do it.

We see so many of our alums going straight to those companies. From my experience being in L.A. and being close to those companies and seeing their ambition, it feels like we provide a great potential resource to them in terms of how they grow. This year, Netflix and Amazon are sponsors for IFP Week. They do want to be supportive of our labs. It’s a great opportunity for those companies to come and support, mentor, meet our filmmakers.

With so much television out there and new generations of viewers consuming content on their phones, do you see future in the feature-length film at all?

I feel like we’ve been here before a little bit, like when web series were first coming out. Now, we’re talking about Quibi. My sense is that we’re slicing and dicing stories — including feature-length projects — to fit other formats. We’ll see. I’m very curious to see how it all comes together. But there’s something about the feature format that — certainly for me as a producer working in that format — that will remain a dominant form of entertainment. 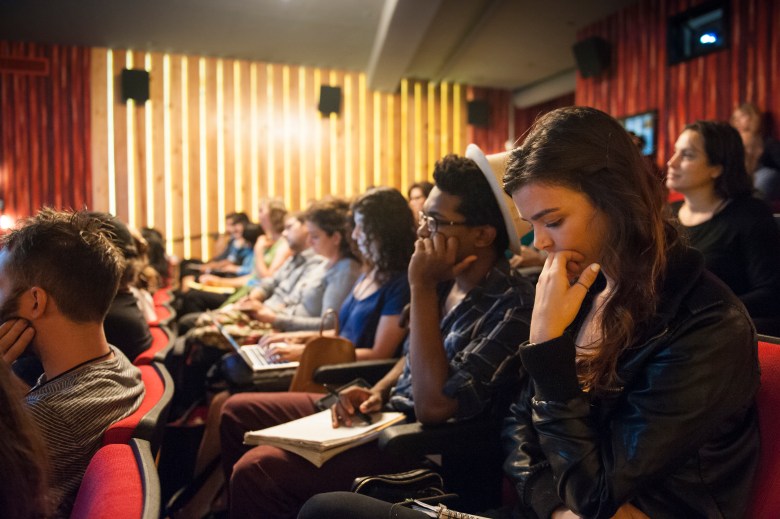 I will say, for IFP’s lab, our episodic submissions were up by some 300 percent. Feature has plateaued, but episodic content has just skyrocketed. There are challenges with getting episodic made, though. It’s hard to hold on to your authorship and your control in the same way you can as a feature writer when it’s so collaborative.

IFP used to be more closely associated with Film Independent in Los Angeles. Since then, the organizations have drifted apart. Is there a plan to rekindle that relationship?

There is. It’s one of the first meetings I took when I started the job. I went out and I sat down with [Film Independent president] Josh [Welsh] because I’m a real fan of what they do and I wanted to better understand the history of the organization. He was so generous with explaining everything. It was primarily geographical, but it was a different time. So we had this partnership with HBO, Black House Lab. It was founded this past year at Sundance. Several of the filmmakers that were a part of that lab were participating in a program at Film Independent the following week and it just dawned on me that, in terms of our programs and our constituency, there’s so much overlap now.

IFP and Film Independent probably felt like these very separate organizations, but now there’s so much flow back and forth. It makes total sense for us to be working together closely. So just in the time I’ve been here we’ve been co-marketing things. I feel like what we do here is probably different but somewhat complementary. New York seems to have a greater sense of connectivity and it’s valuable for artists who need to be close to each other, working together in more independent ways.

With all these changes happening, how do you plan to keep IFP tied to its roots?

I dug up this page when I first started. The formation of IFP was just kind of like a mandate. It explained how independent film was being threatened by these big studio factories, and this organization was made to protect the filmmaking process. It sounds like it was just written yesterday. It’s all the things that we’re grappling with right now. It just serves to remind us that in many ways things will never change. It’s always an art form that is going to be a challenge on multiple fronts to the independence space.

This interview has been edited and condensed for clarity.

Wes Anderson’s ‘The French Dispatch’ Heads to Fox Searchlight, and Of Course It Has an Amazing Cast

The Legacy of ‘A Trip to the Moon’